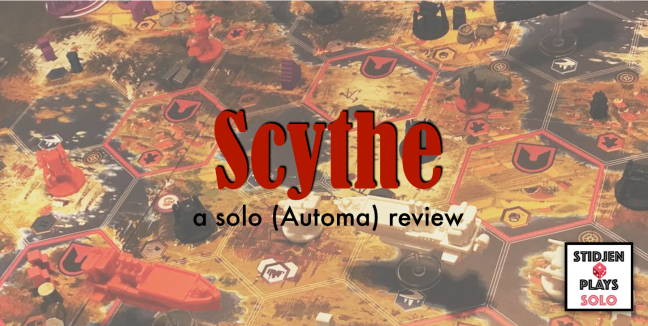 The year is… wait, that doesn’t matter. The Great War is over and we are rebuilding. Everyone is starting over, trying to forget the horrors that happened. Surely humanity will never stoop so low ever again. We are forging our great faction from the ashes of lost nation. We have new technology – these so-called ‘mechs’ – given to our leader Gunther by the great Nicola Tesla. I am sure Gunther will re-establish our faction as one of the world’s greatest. I am sure Gunther will find Tesla – who went missing – and together they will forge the remains of Europe into a single unity. Surely everyone will see this is for the best! 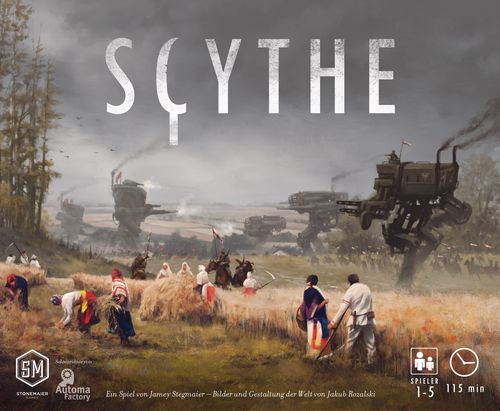 What the game is about

In an alternate history 1920’s, players are in control of nations rebuilding after the World War. They have mechs, fueled by technology from the legendary Nicola Tesla – who has disappeared. Maybe he hid in the mysterious Factory, right there in the center of what used to be Europe? The game is based on the fantastic artwork of Jakub Różalski, which generates an interesting atmosphere of mechs and civilians working and living together. This basic premise of his artwork is the core of the game.

The artwork of Jakub Różalski is what caught Jamey Stegmaiers attention, and so did mine. Jamey made this game starting from the artwork and working towards a game that matches the art in every possible aspect. You are rebuilding your faction and there’s a palpable tension of war in the air. I don’t like a lot of fighting in games, but in this game the fighting is limited to just a few combats – the Cold War-like tension more than makes up for this. The artwork contains various easter eggs which are great to discover. But you won’t need those – the art itself tells stories big and small.

How the game works

In Scythe, players have their leader miniature and two workers available at the start of the game. You can choose from five factions (there’s two more in the Invaders From Afar-expansion) – each comes with their own abilities. Players also have a player mat, from which they select one of four actions to execute each turn.

Each of these actions is called a ‘top row action’, since there are also four ‘bottom row actions’. Those cost resources; you can execute them if you have the required resource.

The game ends when one faction their sixth star on the achievement tracks, gaining stars for feats like deploying all four mechs, building all structures, or winning in combat. You tally up your stars, controlled territory and resources, and score money for each based on your popularity.

When playing solo, you play against an opponent whose actions are defined by one card drawn each turn from a deck. This mechanic is called an Automa player and debuted in Viticulture, a previous game from Jamey Stegmaier en Stonemaier Games.

When I first opened the box of Scythe, one of the first things I saw was the Automa deck. It baffled me – this wasn’t what I saw in the videos! I quickly found out they were the Automa cards – phew! The cards seem confusing at first but are actually quite clear when you get the hang of it. They list various things the Automa player gets, does, moves, or deploys. This is because they only get a faction mat, not a player mat. The Automa instead has tracker cards to determine when they can cross rivers, when it gains stars and when you need to shuffle the cards and turn them over to their more difficult (red) side. Each Automa card contains the following information:

There are special rules for moving and attacking. The Automa doesn’t move like regular units, instead it sort of teleports based on various factors (proximity to its own units, the Factory, and you). This makes the Automa more aggressive then a human opponent, since they tend to be more calculating. However, since the Automa gains combat resources to complement their aggressive stance, they can put their money where their mouth is.

The amount of value in the base box is just stellar. Each faction has its own unique leader and unique set of mechs; the coins feel different from each other and resources are not just cubes but wood in the shape of the resources they represent. Heck, even the meeples are different for each faction! Jamey Stegmaier went on record to say that his goal with Scythe was not to make the most money, but to give people the most value for their money when they buy the game (without bankrupting himself or his company).

What I also like is the additional content. By now I’ve bought realistic resources – resin woodblocks, food sacks, oil drums, and metal iron ingots –, metal coins, extra cards, sleeves, and an insert. Since Scythe was a Kickstarter game with lots of stretch goals unlocked, you’d think additional content would be Kickstarter-exclusive – except it isn’t. Stegmaier also wants as much people as possible to enjoy every bit of content of Scythe and not make things limited. I applaud him for his vision.

The multiplayer game feels a bit like solitaire – everyone is on their home peninsula, not gaining much ground at first because there’s rivers blocking you. When those invisible borders open, the game turns into some sort of engine builder with a Cold War-touch to it. In the Automa-game, the early game limitations and the engine building are still there, but the Cold War is absent. The Automa is very aggressive and will attack you if you fear it will. They want to get to the Factory as soon as possible, and spend a lot of resources to get there and to keep it that way. When playing solo, you’re in for a game that’s not exciting because you’re thinking whether or not opponents will block or attack you, but how and where they will – because they will.

So there you have it, my first real review. If you wanted to learn more about Scythe as a multiplayer game, sorry brah – this here review is solo only. As you might know already, Scythe is one of my favorite games ever (if not the favorite game) and the game that was a new catalyst for this hobby. The Automa provides a rich and challenging experience that makes you feel like a war commander trying to outwit the aggressive opponent. If you own it and haven’t played, solo – do it. If you don’t own this game – get it. And I’m not even talking about the expansions and the upcoming campaign expansion, The Rise of Fenris.

My name is Stijn, 33 years old, living in the Netherlands. Since I was young I have been enamored with playing games and I haven’t stopped playing them since. I also discovered videogames in the meantime, but there’s something about the tactile feel of cardboard and cards! My main mode of play is solo nowadays – so I decided to dedicate a blog to it. Here’s to us solo gamers!